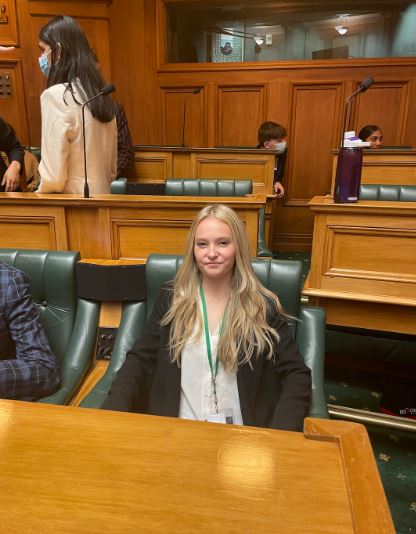 As already in the Principal’s Notes for August 2022, our strong links with NZ Prime Minister Jacinda Ardern show through in a report from our Year 12 Springs student, Amelia Chitty, who was selected for this year’s Youth Parliament.

https://www.youtube.com/watch?v=fVlc17IS4l8 – link to watch the speech

In the world of someone who is paid the minimum wage

All the things I could do

If I had a little money

Mr/Madame speaker, myself and the rest of New Zealand rangatahi who fall into the age dimensions of the NZ Workforce,

Recognise that Our first job was always going to be a minor position where the wages are low because we simply don’t have the skills or experience of that of an Adult….

Standing here in the 21st century I think it’s fair to say the line that divides youth from adults is becoming more and more blurred.

Because what defines an adult?

As a noun, it means “a person who is fully grown or developed”

However, as a verb it means “to behave in a way characteristic of a responsible person, especially by accomplishing mundane but necessary tasks as well as being granted access to society’s perks”

Tasks and perks which include, paying taxes, going to work, holding a licence, being able to leave school or home, getting a passport.

This is what people believe defines a standard adult,

But if this is the case, then anyone who is above the age of 15 is then considered an adult too

Because if myself as a 16 year old can do all of these things that an adult can, why am is still being discriminated based on my age in certain situations,

such as not being entirely eligible for an adult minimum wage.

When it comes down to the economics of this situation

We are looking at the concerns of unemployment

It is believed in the economic world that when a wage rate is increased, it will cause unemployment rates to rise

As the only way an employer can retain or hire staff at these wages is to RAISE the prices of their goods or services,

BUT this will actually DECREASE consumer buying and therefore decrease the business’s economic viability.

Although this does make sense,

as I see it it’s all theoretical

As they are arguing that raising the youth wage to meet the adult wage would cause unemployment rates to increase,

However, this is based on the assumption that the youth wage is actually ever used

As a 16 year old with a part-time job in a supermarket, I can justify this statement as I am able to say I am paid the adult minimum wage,

despite society telling me I am not an adult

After talking to a couple employers I have come to the conclusion that the low uptake of this youth wage is due to two reasons,

either the employer is unfamiliar with the laws around wages, or it is simply more unwanted administrative work.

So although it is cheaper for an employer to pay the youth wages, it is an additional administrative effort that most employers don’t have time for.

Therefore they find it easier and far less time consuming to just pay everyone the same minimum wage, no matter what age you are.

Now I know that just because I am lucky enough to be on the adult minimum wage doesn’t mean everyone else is.

This is then uneven application of the youth wage,

Therefore I am here to say we must seek justice against the age based discrimination the minimum wage act has caused our country.

We must see that New Zealanders in the workforce who are 16 or over are treated as the, growing mature humans that they are,

“Paying good wages isn’t charity at all, It’s the best kind of business” 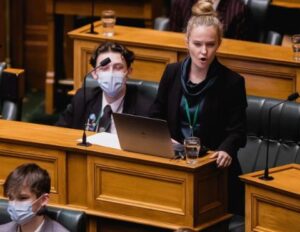 This amazing experience all began in the November lock down in 2021 when I saw an Instagram post advertising for Youth parliament positions. Without overthinking it, I created a 3 minute video as an application and submitted it to our school’s electorate MP (and our Prime Minister) Jacinda Ardern. I was surprised to discover that I was 1 of 2 that she had selected. However, as Jacinda was busy handling the Covid Crisis, she decided that the Auckland Central MP Helen White would be a better mentor for me.

Since then I have been officially a part of Youth Parliament, which is a unique event held every three years for young New Zealanders to learn first-hand about democracy, influence government decision-making, and have their voices heard. My interest in politics and global issues actually all began in year 9 when we studied NZ politics so it was so exciting to be selected and learn more about how our government works. For the months that followed being selected, I attended meetings and functions, as well as community projects all as part of my role. This prepared me for the 3 day Youth Parliament event in Wellington at the Beehive where I was not only part of a select committee but was also given the opportunity to give a 3 minute speech in the house (on LIVE television)! Being a youth MP has to be the most memorable and life-changing experience I have had to date. I have now made friends with other like minded youth all over the country that I believe I will keep for the rest of my life. When this opportunity presents itself again in 3 years, I would encourage any eligible student (16-19 years) with an interest in politics to apply!

On Thursday 29th of September 2022, a sold-out performance in the Kiri Te Kanawa Theatre…