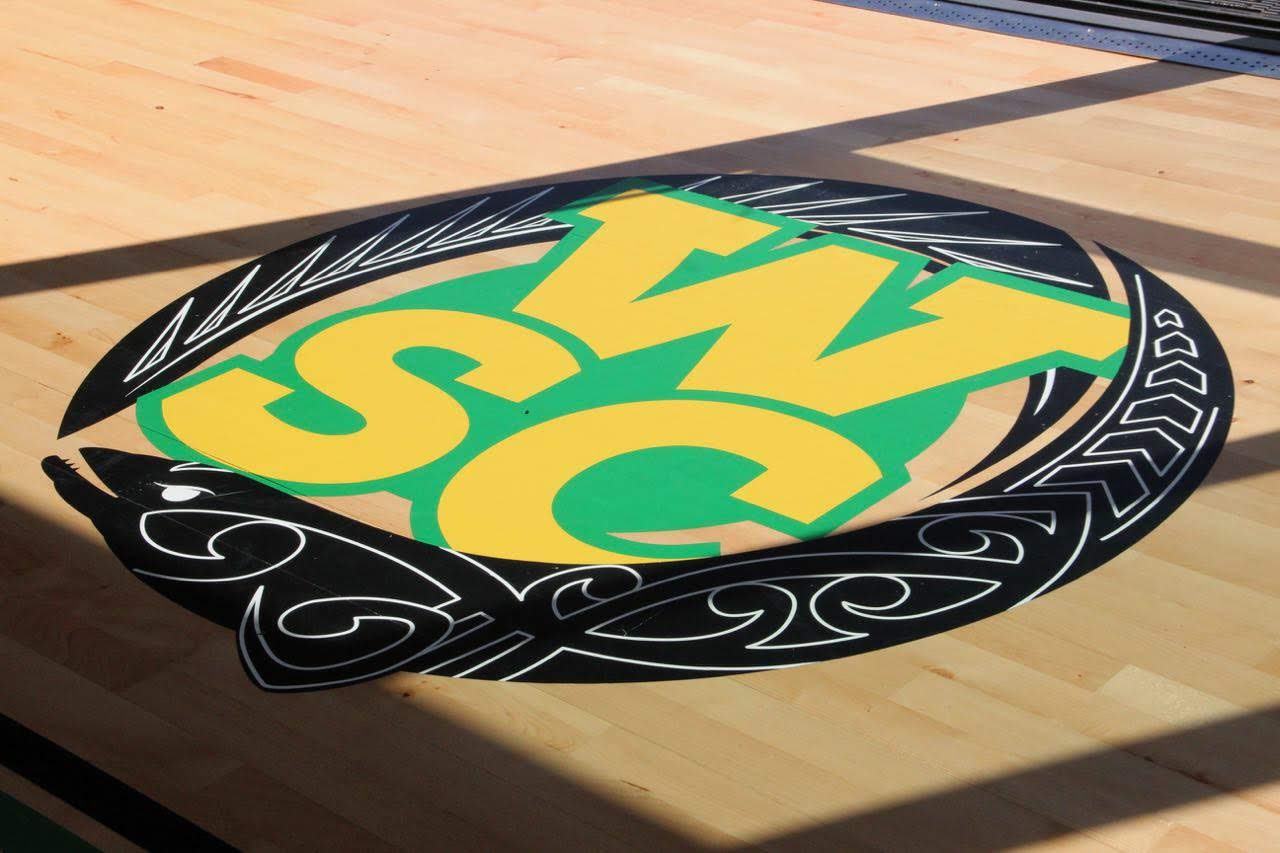 A huge THANK YOU to all those involved with this amazing sporting week for Western Springs College-Ngā Puna o Waiōrea – from all the Coaches, Managers, parent/whānau helpers, supporters, behind-the-scene helpers – we couldn’t have pulled this week off without you all!

Reports from Team Captains or Management

The Junior Premiership Tournament was held at the Bruce Pulman Arena, Takanini, Auckland. This was the first tournament for all our Junior players and a first for Western Springs College (WSC) for quite some time.

The tournament was comprised of 14 teams in the Premier Grade throughout the Northern Region of the North Island.

The team was led by Coach Woolley Le’au’anae, Assistant Coach Anthony Kalolo and Team Manager Ben Huh (parent of one of our players, Jordan Huh).

Our Junior Premier Boys team lost all 5 games, until their final win against Manurewa High School. The team realised the difficulty of the task, but played exceptionally well considering the circumstances.

Our stand-out players were our Captain Jacob Gardiner, and brothers Jack & Daniel Brophy.

Thanks to all the players, Coaches and Manager for their sacrifice and ongoing support during the tournament. Thanks also to the parents and families who came out to support our boys. 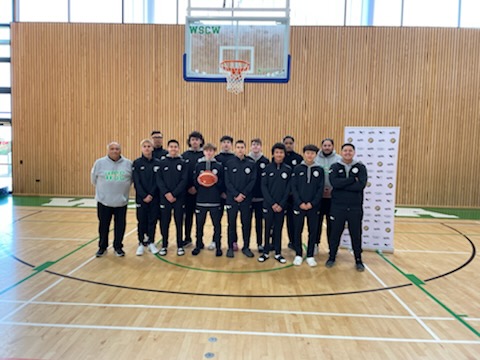 The team was led by Coach Woolley Le’au’anae, Assistant Coach Anthony Kalolo and Team Manager Liam Holwerda both as former students of WSC.

This was the first tournament that most of our boys had attended. They were competing against 15 other school teams around the Northern Region of the North Island.

In pool play, the boys went through unbeaten with convincing wins against the following schools: Takapuna Grammar School, Rototuna High School and Kaipara College. These wins enabled the team to qualify for the Quarter Finals against Ormiston College, which was again won convincingly.

In the Semi Finals, our boys came up against St John’s College (Hamilton). This game proved to be a very close and tough encounter due to the opposition’s relentless defense and sharp shooting. The game was tight throughout the first 3 quarters, but in the end, St John’s pulled away in the 4th quarter eventually winning by 9 points. Irrespective of the result, this was probably one of the best games our boys had played throughout the tournament and the whole season.

Our final game for 3rd and 4th placing was against Sacred Heart College. This was a great team effort by all the boys, winning comfortably by 40 points. The game saw all our boys participate and also farewell our Year 13 boys – Keller Young, Tupaia Tawhiao-Tippett, Diego Monasterio, Theo Voon-Clarke and Callum Jones (injured) – in their last game for the season.

The entire season for our Under 19s Premier Boys Basketball Team was a great success, coming in the Top 2 in the Central West Zone regular season tournament and 3rd in the Northern Cup Regionals. This year proved to be a great opportunity to showcase our talented basketball players, as well as some new players from the Under 17s Premier Boys Team who later joined the Senior Team for the tournament. The future of WSC Basketball is looking good!

Our stand-out players were our Captain Keller Young who led the team by example (No. 2 Leading Points Scorer for the tournament), who was greatly supported by Tupaia Tawhiao-Tippett, Callum Jones, Benjamin Richard-Marsters and Jack Moon.

Thanks goes to all our Under 19s Premier Boys, our Coaches & Manager including Coach Woolley’s wife Sally Le’au’anae who looked after the boys’ injuries throughout the tournament. Thanks also to all the parents and families who came out to support us. A big thank-you also to Pete McIntyre and Sami Va’auli for their ongoing support in the WSC Sports Office during the tournament and throughout the entire season.

The First XI Boys Football squad (The Mighty Eels) participated in the Malcolm Cowie Cup Tournament at McLennan Park in Papakura during the NZ Secondary Schools Winter Tournament Week. A total of 24 teams from around the country were at this tournament. We had a very successful tournament with only one loss (2-1) in the semi-final against Burnside High School over the 5 days. The team finished the tournament on a high with a 4-0 victory against St Andrews College to secure third place & the bronze medal.

Dexter was awarded the Golden Boot as the highest goal scorer at the tournament with 9 goals. In addition, Dexter and Shaan were jointly awarded Tournament MVP for our team, based on votes from the opposition team management.

This tournament marked the end of Secondary School Football for Bruno, Cam, Frank, Matt, Ollie, Rio and Shaan. We would also like to thank Greg Uhlmann and Scott McKee for coaching and managing throughout the season as well as Matt Parker for all his hard work behind the scenes. Thanks also to ALL of our supporters across our 2022 season  – we really appreciate it! 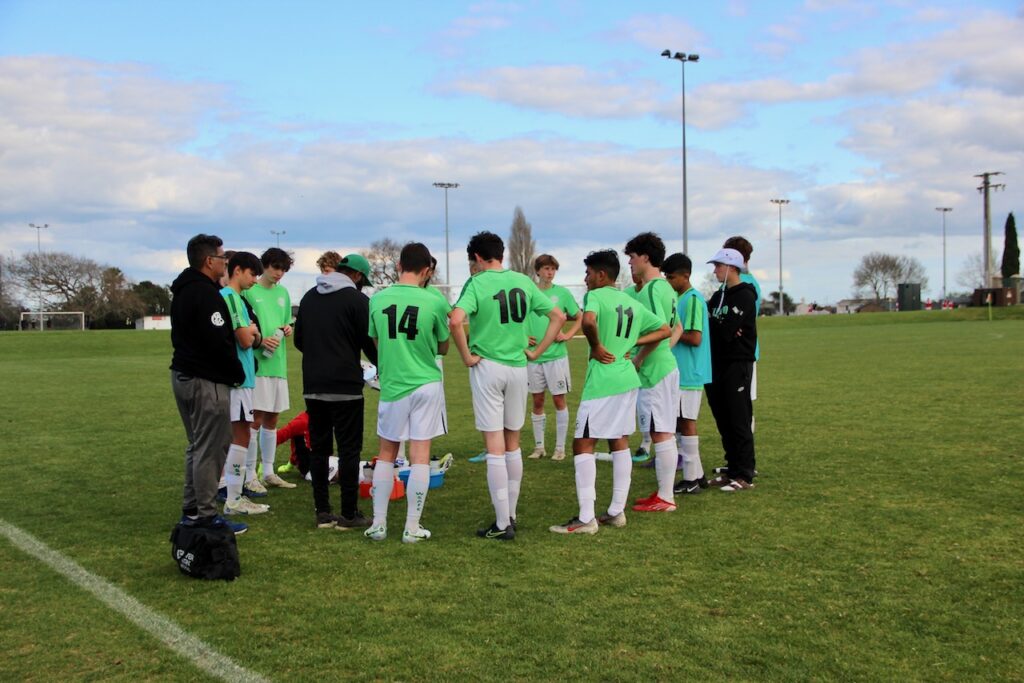 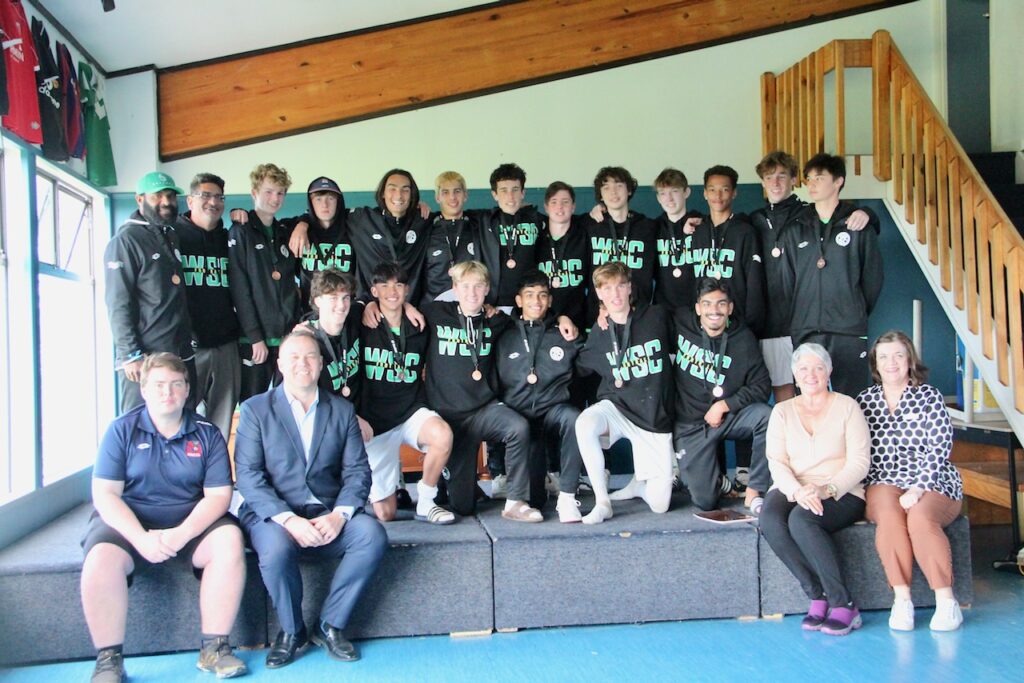 In week 6 of Term 3, our First XI Football Girls team competed in the Kathy Seaward tournament against 18 teams from across the upper North Island. After 2 years without tournaments, this was a big deal for the team, captained by Lotta McNamara, as well as an opportunity for a final win at the end of our season.

We started the week off strong, with highlights of a 6-0 win against Green Bay (goals courtesy of Charli, Lulu, Lotta, Emily, Kaya and Tess), a 5-0 win against Kristin and another 5-1 win against Mt Roskill that landed us in the top 6! Filled with confidence and good spirits from our earlier games in the week, the team was sore but ready to face even tougher competition in hopes of a podium finish.

After a hard-fought semi-final against MAGS on Thursday, we came up short with a 0-1 loss which landed us in the 3rd and 4th place playoffs against Onehunga. Some yellow and green zinc upped the team spirit and helped us prepare for our final game on Friday. While we were down 0-1 at halftime, the second half provided one stunning goal from Emily Worsley plus two amazing shots from just past halfway by Lotta and Greta Burrell that earned us the 3-1 win, winning us the Bronze Medal!

A massive thanks to Andy Vernon, our Coach throughout the tournament and this year’s season, Becs and Alastair for being the world’s best Managers and to all the other parents who came out to show their support throughout the week. Most of all congrats to the girls for all their insane effort and team spirit, and amazing tournament result! 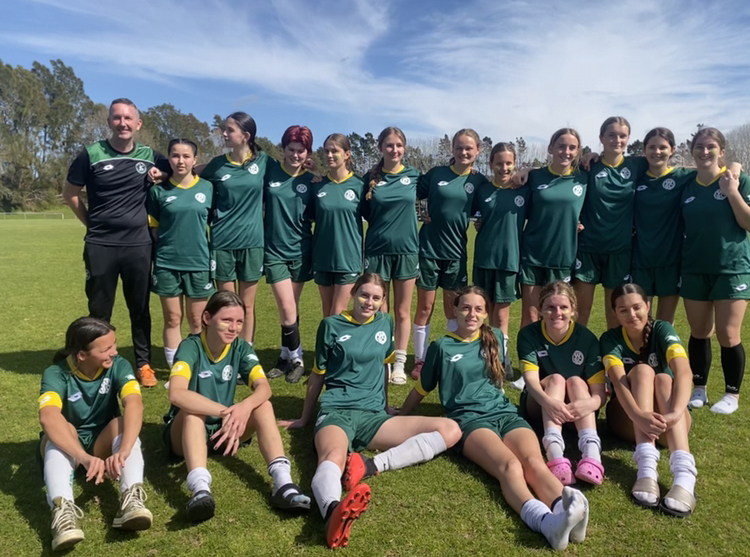 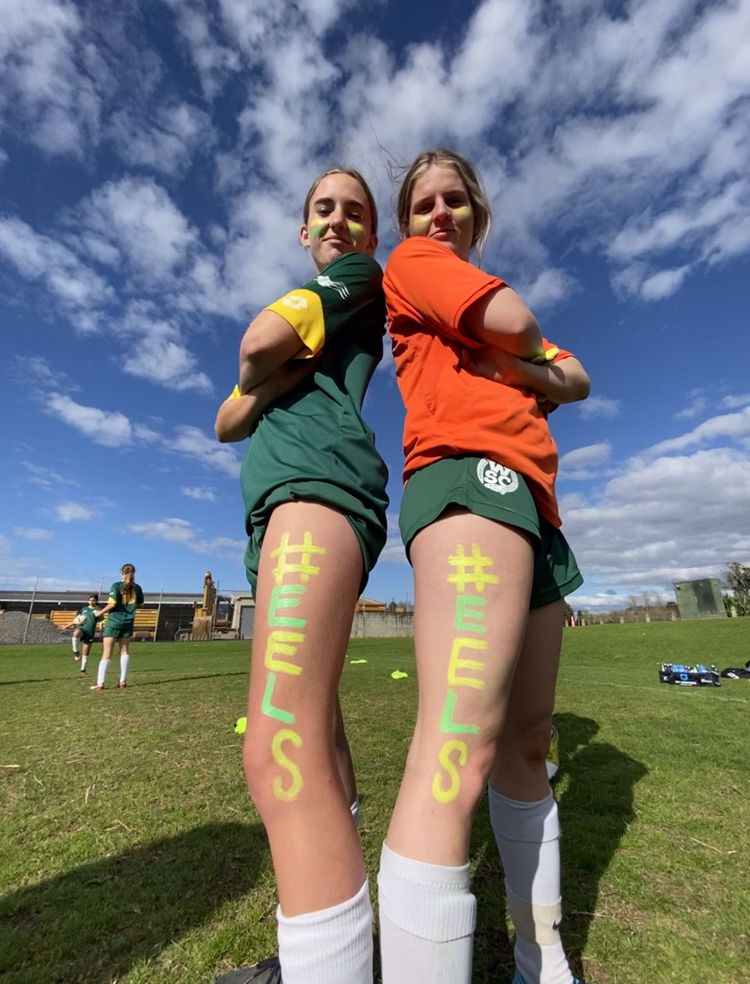 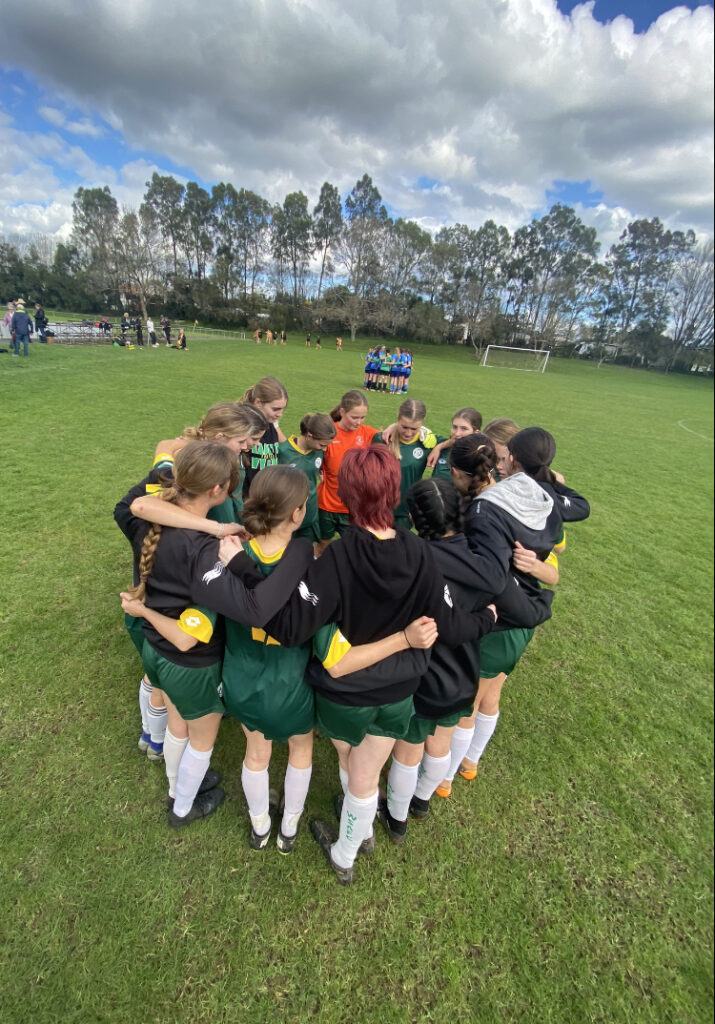 From the 29th of August to the 2nd of September, the Western Springs College’s Premier 1 Netball Team competed in the UNISS Tournament at Howick Netball Courts. Ten games were played over 5 days, with us winning 8 of those. We were unbeaten up until the final days with Tuakau beating us by 2. Skill, determination and grit was shown by the whole team as well as plenty of fun and laughter as well. For the first time in WSC history, we have placed in the top 5 – meaning we will move up into A grade for UNISS 2023!

A huge shout-out to our amazing coach Letoia, Assistant Coach Terina and our awesome sideline help Lucy, Pete, Sami, Jacqui and Rahera! Also, a special mention to those parents and teachers who came out to support our girls! We appreciate you all!

Another special mention to Anuella Vagana and Brooke Caddy for making the B Grade Tournament Team as well. Overall, it was a huge success and one of the best campaigns to date. Congrats girls, so proud and we are ready to go again in 2023!

Maeve Gooder, a Year 10 WSC student, had a fantastic week at the North Island Secondary School Equestrian Championships. It was a huge event with schools from all over the North Island taking part, with 196 riders and 231 horses competing.

There were many disciplines to take part in – dressage, show jumping and arena eventing. Competitors took part in a number of competitions each day and Maeve and her pony Waiwai have come back with a great result for the WSC Equestrian team, having placed 2nd overall for show-jumping in the 80cm-90cm pony class across the whole event. Fantastic result, Maeve!

Maeve was lucky to be able to join up with some friends in the St Mary’s College team – they all supported each other wonderfully across the week. Hopefully we’ll have a full WSC team there too for 2023! 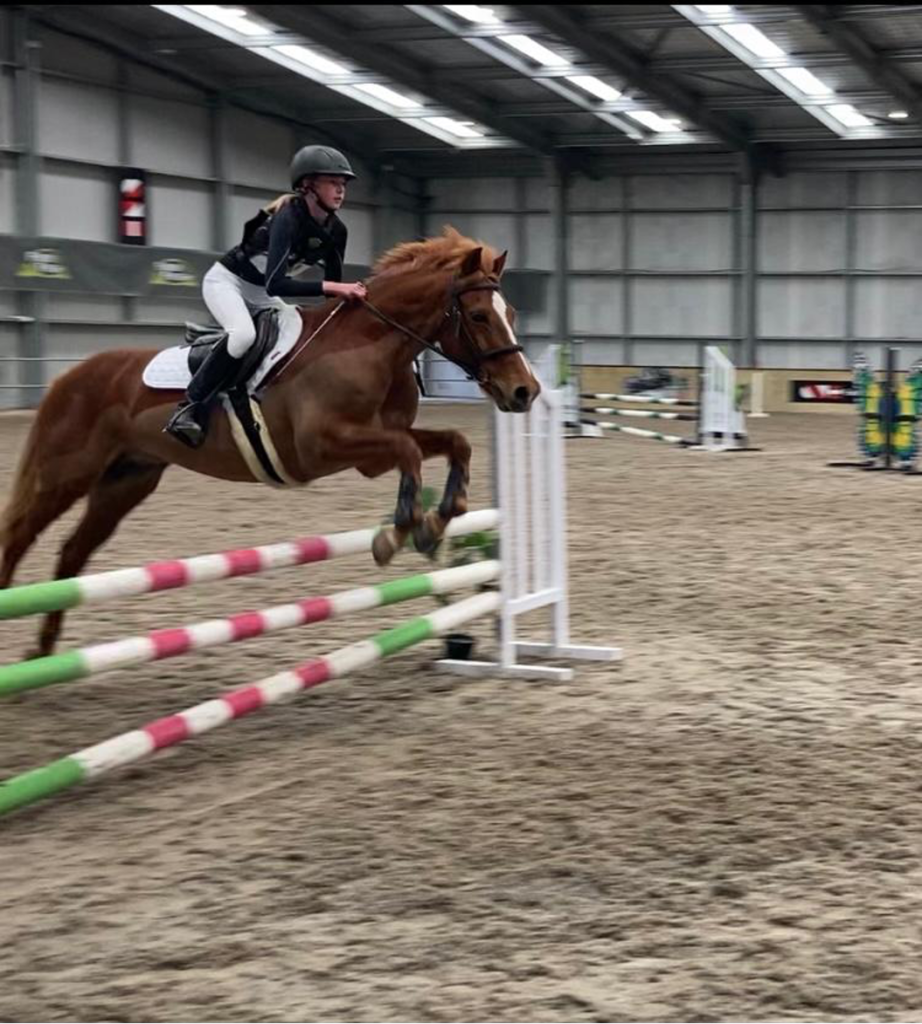 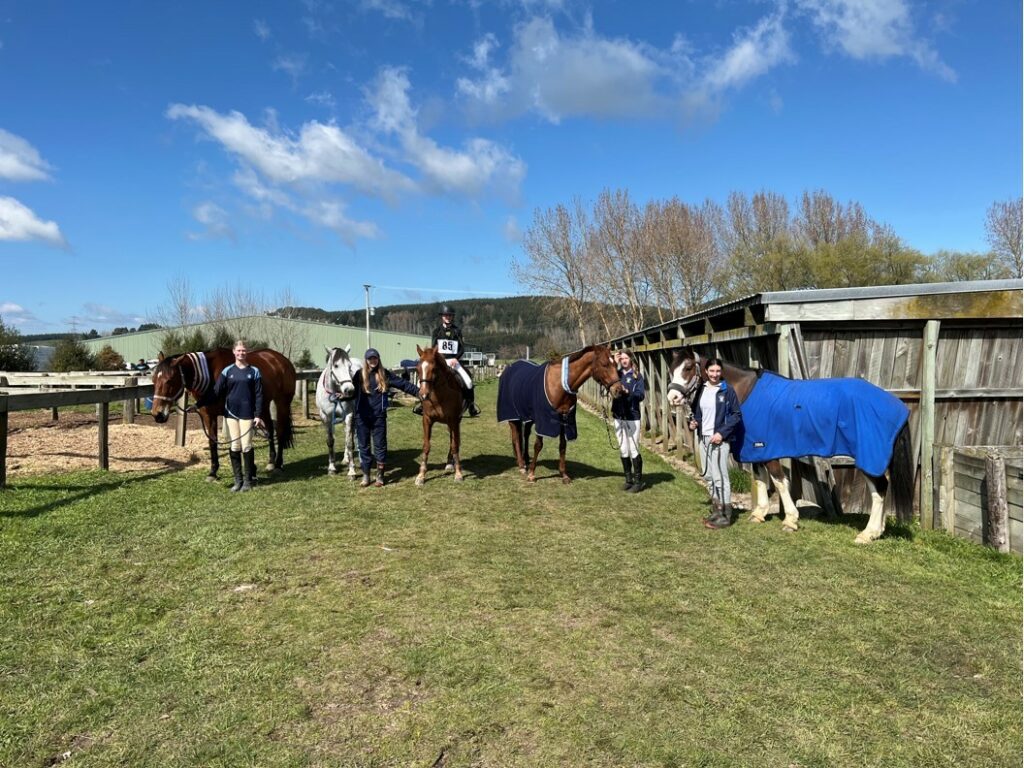 It was fantastic to watch them in action – Congratulations Sophia & Amaya! 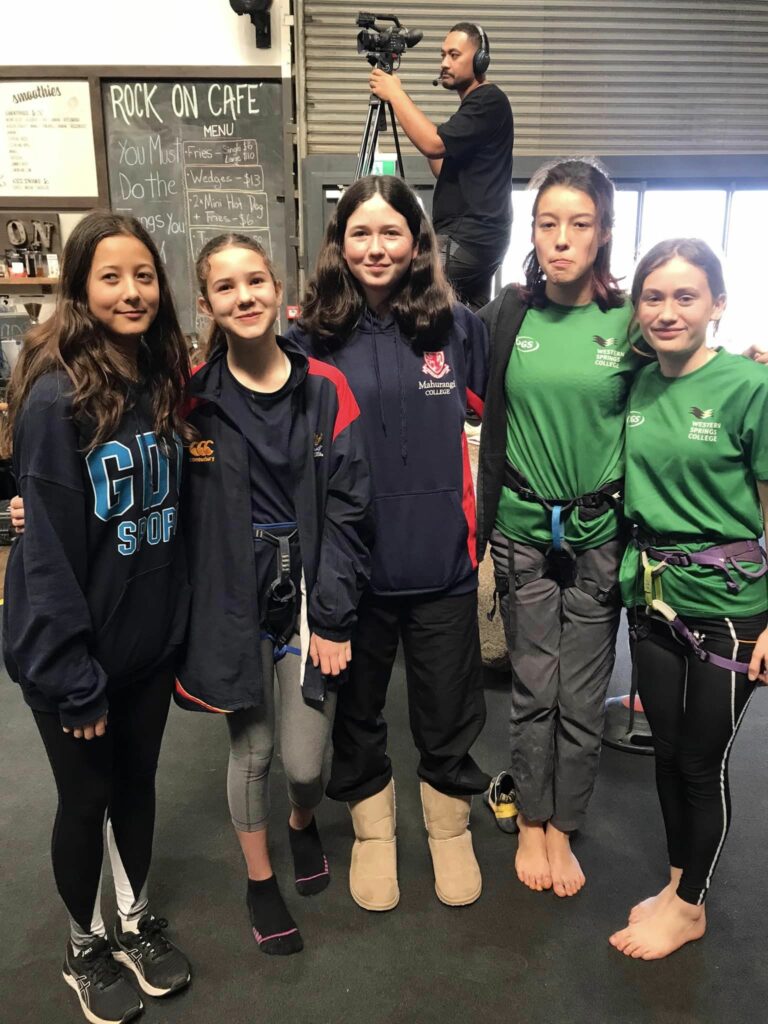 Unfortunately these two two teams were unable to compete during the Winter Sports Tournament Week as the tournament was cancelled due to a lack of snow (i.e. a health & safety issue).

On Saturday 27th of August, they held two slalom races, with Max getting a third and second placing. The next day, Max competed in the Giant Slalom race and came in 2nd place (as pictured below). Congratulations Max!

All the effort in training is starting to see results, which is especially rewarding after a tough couple of seasons interrupted by Covid. 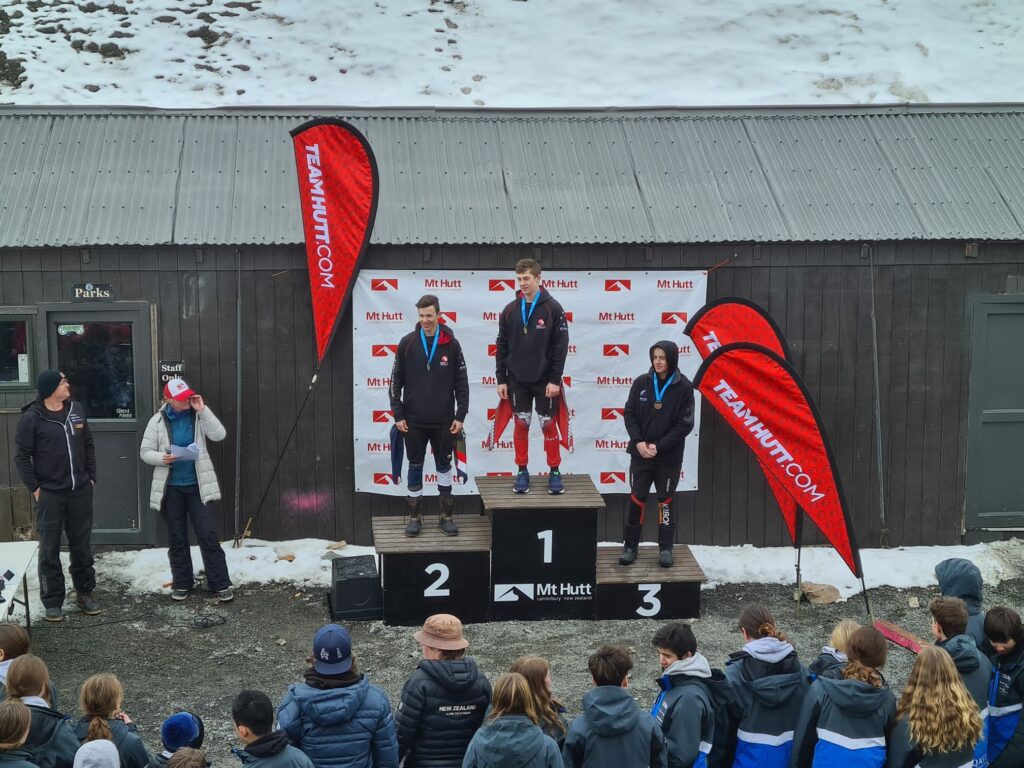