The term is ending with Dance! Don’t miss the Junior Dance show ‘Semester I: Studio Showing’ an informal showing of dance from Semester I on Thursday at 3:30pm at TAPAC Theatre. Please head along to TAPAC to support our junior dance students, their Y13 mentors and teachers!

Like no other this year we filmed our Sheilah Winn Shakespeare performances to be assessed online! Our Sheilah Winn Shakespeare team prepared 5 and 15 minute excerpts of Shakespeare performing to a very small audience of peers and teachers only at TAPAC Theatre. It was fantastic to see incredible creativity with student and teacher direction, authentic performance and marvelous individuality showcased in a very short period of time. We were excited to see all students pick-up rehearsal post-lockdown to not only participate but receive wonderful recognition of their performance and efforts.

A huge congratulations goes to the following students: 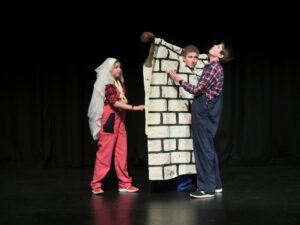 The Tempest, Act I, scene i

We’d also like to recognise the efforts of Y13 students Jamie Heathcote and Ava Van Berkum. Students spend a lot of their own time over the term rehearsing in preparation for the competition. On behalf of Robert Pollock and myself – well done to all and we are very proud of you.

Thanks to Jamie Heathcote – 13Art Design – for the ArtsNews Heading in this issue. 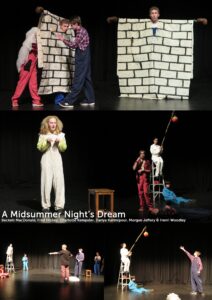 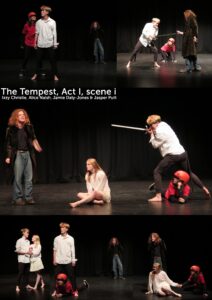 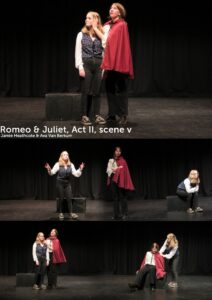 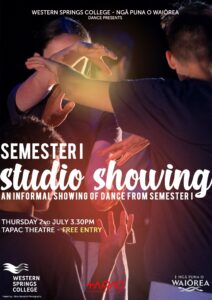 So term two has ended after twelve weeks, half online and half in school. It’s been a rollercoaster ride for teachers and students alike.

The Year 9 drama students have finished the term with short performances. There has been some excellent work and the students can be proud of their efforts.

Year 10 were assessed on their devised scenarios, which they created based around the story “The Curious Incident of the Dog in the Night-time.” There were a range of very different styles with some excellent use of the conventions of drama.

The year 11 students have finished their first assessment, which required them to perform scenes from New Zealand Theatre and to show in performance that they understood and could convey to an audience the range of features specific to New Zealand Theatre. We will rework these scenes under teacher direction and they will be performed for a live invited audience in week two of term three.

Year 12 students have now completed two standards, drama techniques and script writing. The latter was a difficult and time consuming standard and not one we have attempted before, but one which was forced upon us by the lock down. Kayleigh Haworth reports that we have some budding playwrights at WSC NPOW. In term three the students will focus on ‘Epic’ theatre and we have a performance surprise awaiting you towards the end of the term.

The year 13 students have been assessed on their devising standard and are now working on scenes from a range of theatre forms or genres. They will be assessed on their use of drama techniques and their ability to select and use features specific to the particular scene they are performing at the end of term three and will perform these in week four of term four.

So one busy and unusual term down and another about to get underway after a well-earned break. More news next term!

GREETINGS FROM THE VISUAL ART DEPARTMENT

At the time of writing it is the last week of Term 2 and the junior students are busy completing their works; Y9 have ‘Pattern Painting and Taniwhas’ to resolve and the Y10s are finalising research and work towards gaining NCEA level 1 credits with their ‘food-inspired’ Thiebaud paintings.   The Y11s have likewise been productive – creating work towards the second internal to construct their template for an ambitious panoramic collagraph print.  It has been a while since we have attempted large printing at level 1, but the students have embraced the process and are enjoying the challenge of thinking backwards.

The senior Art history classes have also been busy writing towards their internals and demonstrating understanding of media and ideas.  The Y12 Daumier inspired clay caricatures and the Y13 progressive responses to Atonal music and Kandinsky are great examples of student understanding that will definitely assist them to write with authority and develop their ‘voice’. 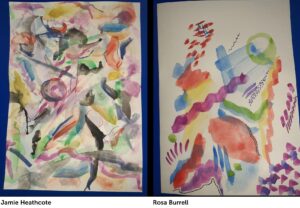 It’s been a whirlwind of a term with COVID19 impacting the learning goals, delivery and outcomes of our programmes.  As a department we have indicated to students, HOHs and parents (during the recent report evening) that there are possible options for students to pursue reduced credits as a way of managing workload issues.  Please feel free to contact myself or the HOH if you would like to discuss these further.

Although there are no Art workshops for these holidays – students have been briefed by their teachers and there are reminders and dates to check on the google classroom sites.

A big thank you to the newspaper fairies who have been keeping our classes fully stocked throughout the year – we are also interested in any unused jars if they have not already made their way to the recycle bins.  We would also like to acknowledge the generous gifting of two Art folders from parent Nichola Hart – these pre-Google resources are a valuable source of tactile information that will make a great adition to the Art History shelves.

Lastly, on behalf of the staff and students – we would like to farewell our TIC Art Photography teacher Danielle Teleiai who will be taking maternity leave next term.  We wish her all the best and look forward to her new additions when she returns to school.