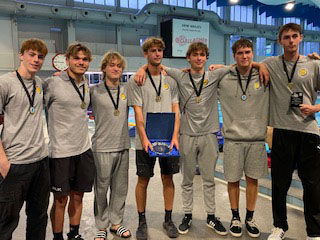 Our school water polo team just won division 2 nationals!  Here’s how we did it.

We started off rough with a loss against Christchurch Boys in a tough game. We managed to get better in the second half, the momentum of which carried throughout the rest of the tournament. Our next game was Tauranga Boys. We had lost to this team at the last tournament, but we had improved since then, meaning we triumphed over them with a much better game. Our next game was Takapuna Grammar. Fueled by homemade pies, we had confidence from the Tauranga game, meaning we steamrolled them 15-3, getting us into the top 8.

We had a stretching session at Karapiro to get us into the right mindset, then went into the quarter-finals. An intense game against Hamilton boys went down to the wire, with two goals in it for most of the last quarter. We pushed through and kept our lead until the very end, with our manager Mike’s lucky socks and slides giving us the edge we needed. The boys got pumped for the semi-finals, as we were playing a very strong team in John Paul College. They had won the last tournament so they were the favourites, with lots of supporters on their side. We came in swinging, giving John Paul a fight they didn’t expect. We shut down their strongest player, and our goalie cleaned up everything else. This allowed us to dominate on the attack, with Fergus scoring 5 of our 7 goals. The boys were pumped with this win and there were lots of celebrations.

Next was finals time. If it wasn’t already exciting enough, we were playing Christchurch Boys, the team we had lost to in the very first game. We knew we could use the loss to our advantage. We had been improving the whole tournament and came in firing. We took an early lead up by 5 goals by the end of the 3rd quarter. They managed to recover towards the end of the game, coming within 1 goal of us until the last 10 seconds, when we scored one more goal to seal the victory, with many celebrations ensuing after a physical and rough match. This was a great way to end the season, and it was good to finish on a win for the year 13’s. Thanks to coach Hamish and Adam, manager Mike, camp parents Alene, Ange and Nikki and all the other parents.